How Your HiTech App Idea Can Focus on Future Trends

Hot trends today often predict the everyday reality of tomorrow. And everyday realities can mean thousands of users downloading your app and using it all the time. Even flash-in-the-pan tech trends that peak early and fizzle out quickly can teach you why certain features don’t work, which is just as valuable a lesson as those that do. Staying on top of HiTech trends helps you stay on the cutting edge of which technologies are emerging in what sectors, and may guide you towards creating a truly innovative product. Let’s see what’s hot in HiTech app development, and how it could work for you.

There’s no hotter buzzword in mobile app development than IoT, and it’s growing fast. According to this report, the total global market of IoT is expected to grow to about $520 billion by 2021. Generally speaking, it refers to products that are connected to the Internet that never were before. Think integrated homes, with connected kitchen appliances, security systems, and climate control, for example. IoT also has enormous applications in industrial settings, mainly manufacturing, and other fields like automated transportation. Even everyday items like bathroom scales, running shoes, and yoga mats are becoming connected, and most will have an app to interpret and present the data collected, as well as control any various items. Focus on intuitive and easy to understand UX systems; the IoT has been relatively slow to catch on with many populations, and presenting the manufacturers of these products with a simple app that controls everything easily might be just what they’re looking for.

Most people have something they own that is voice-controlled; maybe a smart speaker or remote control. However, the field of voice-controlled devices, paired with the massive market of IoT we talked about above, is only getting bigger and broader by the day. Rapid advances in natural language processing (NLP), which allows voice recognition computers to understand multiple languages, dialects, and slang, should lead to widespread adoption with infinite possibilities. Personalization is always sought after with everyday apps, so individual voice recognition within a family of six, for example, would allow everyone to have their own calendars, music playlists, or temperature settings simply by saying their name. There are even ways to integrate voice technology with security systems on FinTech apps or locked doors. It’s best to stay on top of emerging trends and products if you want to enter the voice technology app game.

Granted, chatbots and virtual assistants serve different purposes, but they are similar constructs, in that they interact and assist people with various tasks. The role of the chatbot on websites and apps has evolved greatly; previously, chatbots were basic programmed speech bubbles that could do rudimentary searches or alert a live representative that there was a problem. Now, chatbots are created with smarter and more intuitive software, meaning they can provide 24/7 support for all aspects of the site or app with personalized answers and guided solutions. Developing a smart chatbot that can be integrated into various apps, or making sure your app has one, is a smart strategy.

Likewise, virtual assistants play a big role in corporate America already, and they are experiencing rapid improvements. Names like Alexa, Jarvis and Lyra are commonplace now, but their scope of function and intuitive programming is giving them more capabilities than ever before. Many have a personal tone while using voice communications, like cracking jokes and reminding you where you’ve made a wrong turn off the highway before. The more successful virtual assistant apps are typically quite compatible with third-party software, which increases their functionality exponentially.

The amazing immersive experience that VR offers is something everyone should experience. Thanks to recent technology, it’s much more accessible than ever, and VR apps are becoming much more popular. Many of these VR platforms are smartphone-based, and the possibilities are endless. Of course, gaming is at the forefront of this technology, including intricate role-playing games with enormous worlds to explore. There are also many other entertainment-centric apps, like immersive film viewing, travel destination explorations, and even a VR graffiti experience.

Many other sectors are ripe for VR app use, including healthcare, education, and the arts. Yes, much of this technology is complex and powerful, but as access to VR increases, so does demand. The ability to virtually walk into a furniture store, famous art museum, or even into the human body at a small scale will be everywhere in a few years, and retailers, manufacturers, and inspectors will need to have this ability available as well. Look for sectors that project to increase spending on this sort of technology, and aim your app development in that direction.

As software and devices advance, so too does the network. The 5G revolution is upon us, meaning higher speeds, greater bandwidth, and increased connectivity. This will affect everything we discussed above, like faster VR graphics and more connections to the IoT, plus a lot more. Here’s a graphic that explains the advantages:

So, if you’re developing an app soon, you’ll have a much greater capacity for extra features, immersive UX, giant file transfers, and more. The ability to create 3D models increases and the blazing fast network helps less powerful devices and hardware run apps as fast as the newest ones. 5G is a game-changer for everything from file storage to streaming services, so make sure you’re building your app with this in mind. As we’ve mentioned before, including high-end tech stacks and easily scalable code with your app at the beginning of development is a wise investment, as trying to catch up after launch with updates and downtime can lose you users and money. Consult with a business analyst to make sure your upcoming HiTech app will be able to take advantage of everything the 5G network will offer.

Currency, and how it is used in financial transactions,... 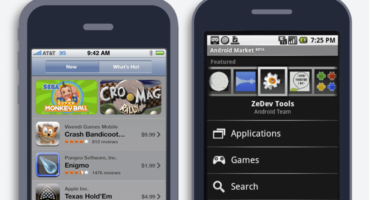 Healthcare has evolved in many ways this year; more tha...