Our mobile devices feel limitless and in many ways they are. However, in the early days of smartphones, many of us received a stomach-churning notification every few months: We immediately deleted the most egregiously large files: home videos, old movies, music, and apps.

Although smartphones’ storage capacity has grown exponentially in recent years, storage is still limited. The top ten apps in the App Store (Spotify, Netflix, Messenger, Gmail, Snapchat, etc.) collectively require over 1 GB of initial storage space. After additional media downloads and caches accrued during usage, the storage space can easily exceed 8 GB+. Thus, in order to remain installed, other apps must be frugal with size.

The App Store defines size as the amount of space an app will take once it’s fully installed on the smartphone (i.e., after all of the files are unpacked), whereas Google Play defines download size as the amount of data consumed itself. Due to construction, language, and engineering, App Store apps are also often significantly larger than Google Play apps. Thus, potential customers will inevitably be more sensitive to storage costs on the App Store than on the Play store.

Limits and Criteria on the App Store and Google Play

On the App Store, apps are technically allotted up to 4 GB of space. However, keep in mind that, by default, App Store users are warned about—and given the option to cancel—downloads exceeding 200 MB on mobile networks.

The importance of catering to mobile networks cannot be understated. Users rely on mobile networks for hours every day—on the subway, riding the bus, walking down the street—and it’s wise to make your app available for an initial download anywhere and at any time. Even tech’s most established names understand the significance of the 200 MB limit—all of the top ten apps require fewer than 200 MB of storage for an initial download.

Instead of requiring a large amount of storage for an initial download, consider structuring your app to merely provide the basics at first and give the user the option to add more features, functionalities, and libraries later.

On Google Play, the Android Package Kit (APK) is allotted up to 100 MB of space with two accompanying APK expansion files, each up to 2 GB. Although Google Play doesn’t have an explicit threshold for downloads on mobile networks, any mobile download attempt is accompanied by a message detailing the app’s size and providing the option to instead download later “when Wi-Fi is available.” Alternatively, Google Play users can opt to restrict all downloads to Wi-Fi networks.

Although smartphones with 256 GB and 512 GB of storage are becoming more prevalent, the smartphones accessible in emerging markets are often limited to 16 or 32 GB. Additionally, cellular data costs are usually higher, and Wi-Fi speeds are slower in emerging markets. Thus, if your app is too big, it’s likely that it won’t even be installed.

Getting a Second Chance

When users receive the dreaded notification that their storage is almost full, they’re often directed to a “Storage Settings” page that lists all of the smartphone’s apps in order of size. By minimizing your app size, your app will appear further down the list, and is, therefore, less likely to be deleted. Consider your continued installation a second chance to demonstrate your app’s value to your user.

In order to maximize the number of potential customers, some developers offer “light” versions of their app (e.g. Facebook Lite, Google Maps Go, Spotify Lite, etc.). Although a single app is a wiser (and easier) App Store Optimization (ASO) strategy than two different apps, if there’s absolutely no way to minimize your app size, consider developing an alternative version for space-constrained customers.

It’s important to understand the value of your app to an end-user and plan your app size accordingly. Ultimately, your app size should be proportional to its need. For example, a crucial medical app or a game with an intensely loyal fanbase can justify an immense amount of storage space, while a casual pocket game or shopping app should be sparing. Also, remember that when an app exceeds 200MB, it can experience a 15-25% decrease in conversion rate due to the warning message about its size.

Remember that the true cost of your app lies not only in the dollar value but also in the precious smartphone storage space the user allows your app to occupy. With only a few small adjustments to your app size, you can make your customers (and your download rates) much happier. 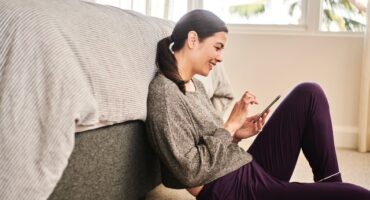 How to Grow Your Patient Acquisition With Hea

You can almost see them walking across your front lobby...

First things first, why are you building an app? The li...

Knowing the temperature to which a product has been ex...